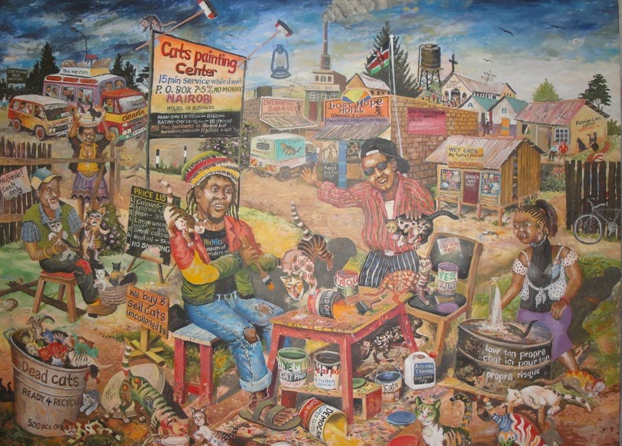 After a flurry of Africa-related shows last year, Fred [London] is back on the case, this time with an exhibition from Kenyan painter and sculptor Joseph Bertiers. This is the artist’s first European solo show, and comes just weeks after four of his works found their way – via the Art Basel satellite show Volta 7 – into the renowned (if somewhat controversial) collection of one Jean Pigozzi.

Pigozzi’s Contemporary African Art Collection is the largest in the world, and works from his hoard get everywhere – even into Tate Modern – so it’s definitely a coup of sorts for Bertiers, and for Fred. But I’m not quite sure how this tallies with Fred’s goal of developing a platform that is ‘not tailored to the concerns of a Western market, but which focuses on the social and political debates engaging African artists today’…  first, is it too much to hope that the Western market and African socio-political issues might, on occasion, come into alignment? (This is not to credit Pigozzi with socio-political awareness, but to try not to tar all collectors and dealers with the same brush; in some ways, it’s getting more difficult to separate out the ‘African’ and ‘Western’ markets anyhow…) Second, what happens if, having distanced yourself from what you consider to be the Western market, that market’s top buyer (a.k.a. Pigozzi) turns up and declares his intention to buy work from you? ‘A sale’ (or four) is clearly the answer, and understandably so, but where does this leave the gallery’s well-intentioned emphasis on Africa-centred business and curatorial practice? This is not the place to rehearse the well-documented reservations many people have with Pigozzi’s ‘neo-primitivist’ approach, but it’d be interesting to hear the gallery’s response to some of the tensions raised here.

Anyway, art world politics aside, it’s great to see Bertiers making strides after his recent run of bad luck, and I look forward to investigating his Brueghel-esque canvases up at Vyner Street soon.

Opening hours:
Weds-Sun, 12-6
or by appointment