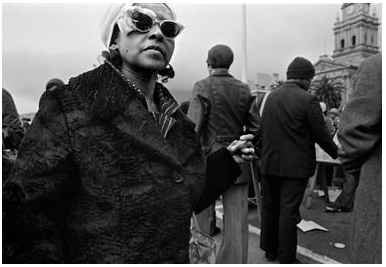 I can’t wait to see Beneath the Surface, an exhibition by acclaimed UK-based South African photographer Steve Bloom. His images from mid-1970s South Africa capture a moment of change, when mounting dissent met with brutal repression, signalling the gradual implosion of the apartheid system.

This exhibition is part of the London Festival of Photography; for further info, see the festival website. Bloom is giving a talk on 11th June at 7pm (tickets £9.99), details here.

Ever wondered what cloth made from spider silk would look like? Wonder no more – go to the V&A before June the 5th (last-minute dash!) and see for yourself. There’s a display of the world’s largest pieces of spider silk cloth, made by Simon Peers and Nicholas Godley from the silk of golden orb-weaver spiders, which they collected in the highlands of Madagascar. Also included in the display is a film explaining how the cloth was made. More images from dezeen here. Thanks again to Elsbeth Court for the heads-up.

Here’s a very last-minute mention for an exhibition of contemporary Shona sculpture from Zimbabwe, which has been on for a couple of weeks already. Featured artists are Gedion Nyanhongo, Hilary Manuhwa and Collen Nyanhongo, and you can find more info here.

The show continues until 10th June.

The October Gallery’s summer show features some of the gallery’s best-known artists, including Rachid Koraïchi, Nnenna Okore and Owusu-Ankomah. The centrepiece, however, is El Anatsui’s gargantuan Skylines?, which has never been seen before in London. El recently drew attention at the Bonhams Africa Now auction, where his piece New World Map sold for £541,250, setting a new world record for the artist’s work.

For the last couple of months, I’ve had the pleasure to be involved in the collaborative photography exhibition Money in Bamako and London. This is the second in a series of projects begun last year by curator Sophie Mew, in which two photographers, one from London and one from Bamako, come together to explore a range of themes in everyday contexts in each city. The exhibitions travel to both capitals, developing cultural exchange between the UK and Mali and offering glimpses of local life to museum-goers in both places.

For the first edition in 2011, Malian photographer Alioune Bâ and UK photographer Diane Patrice examined parallels between London and Bamako. Their images and stories of taxi drivers, football matches and tea-drinking showed that although in many ways the cities are very different, day-to-day activities for Londoners and Bamakois can be surprisingly similar.

In 2012, however, the project sadly finds itself in a rather different situation: in the light of the crisis in Mali following the recent coup d’état, and the ongoing political upheavals, what can artistic exchange projects offer? After much deliberation, Bamako & London has decided to go ahead for a second year, responding to the situation by offering a platform for ongoing exchange at a time of economic instability for inhabitants of both cities. Diane Patrice is this time joined by Bamako photographer Harandane Dicko to explore the theme of ‘Money’, coinciding with the opening of the new Money Gallery at the British Museum.

As Sophie explained, consultation with friends and colleagues in Bamako revealed the importance of keeping creative channels of communication open, even during times of crisis: “It has been a difficult decision to continue this year with regards to the current political situation in Mali since the putsch on 22nd March. The encouragement and support we have received has influenced our decision to continue. Diane has captured the uses of money in different contexts around London, and Harandane has exposed the effects of economic instability and the result of sanctions imposed on Mali in April 2012.” Interviews, captions and stories from residents of both cities highlight the personal costs of national and international crises, as well as the rich reserves of ingenuity and resilience that people draw on to pull through.

The launch is this Friday evening from 5.30 til 8.30, at the British Museum (Clore Education Centre Foyer). Hope to see you there!

For more info about Money in Bamako and London, take a look at the website. This display is part of the London Festival of Photography – see posts coming up on this site, as well as their own website. 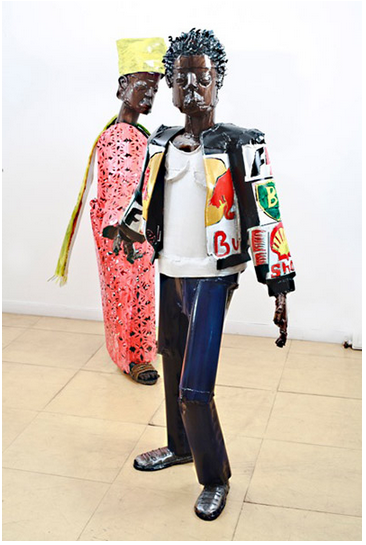 Right. It turns out that not only is Sokari Douglas Camp giving a lecture tonight at the Brunei Gallery at SOAS, she also has an exhibition opening! Hot on the heels of her recent show at Tiwani Contemporary, Sokari has a new exhibition of sculptures, called Dyad. Thanks to Elsbeth Court for the heads up. Really, I can barely keep track of it all.

This Wednesday it’s another installment of Africa Now, the Bonhams auction promising “the very best of post-war and contemporary art from across the African continent”. As my colleagues over at Africa Is A Country point out, the selection is hardly groundbreaking; as they also note, however, auction houses are not exactly at the cutting edge of contemporary art, so expecting anything more from this particular event is perhaps a little unfair. Bonhams’ objectives are purely commercial, and most of the works on offer reflect the tastes (or perceived tastes) of their wealthy, predominantly Nigerian, clientele. As it was once explained to me: “There are two sides to the art world, the whorehouse and the nunnery. And we’re very much in the whorehouse!”

You can take a look at what’s up for grabs during one of the viewing slots:

The auction itself takes place on Wednesday 23rd May at 2pm.

If the whorehouse isn’t for you (or if your experience there leaves you in need of a spiritually purging trip to the nunnery), there’s a talk at the Brunei Gallery that evening from artist Sokari Douglas Camp – details here. 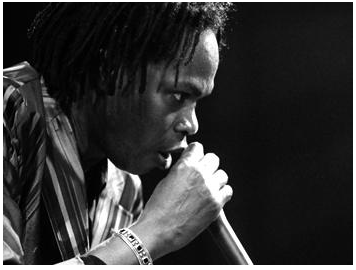 There’s a whole host of events coming up at the Southbank Centre this July as part of Africa Utopia, a month-long festival of music, theatre, film, literature, dance, fashion, talks and debates. Baaba Maal has been involved with the programming, and will kick things off on July 3rd with Word Sound Power, an evening of music and poetry with Lemn Sissay and friends.

Highlights include blues legend Taj Mahal, Malian diva Oumou Sangaré (who I’ve been wanting to see for a few years) and, on July 4th, a special free screening and discussion of some of the short films from the Arnolfini’s Africa sci-fi show Superpower, for anyone unable to make it along to Bristol.

Get your tickets early. For more details on the programme and to book, take a look here.

The Wednesday after next is a busy day for African contemporary art in London. First, there’s the latest Africa Now auction at Bonhams. Later on, if you’re still feeling energetic, there’s a talk from renowned artist Sokari Douglas Camp, who will be speaking at the Brunei Gallery for the Centre of African Studies annual lecture. Her title? “What Picasso knew: Highlighting Contemporary African Art”. Knowing Sokari and her wry, critical take on things, ‘what Picasso knew’ may well turn out to be not quite what you’d expect…

The event will be chaired by Dr Chege Githiora (SOAS),  with Dr Charlie Gore (SOAS) as discussant, and will be followed by a reception.

The London Festival of Photography will be taking over King’s Cross and Bloomsbury this June, with 18 exhibitions and 40 satellite events showcasing street, documentary and conceptual photography.

There are a number of shows and events featuring photography and photographers from Africa – highlights include the Gaddafi Archives and Jodi Bieber in conversation – and I’d like to give a special shout-out to Money in Bamako & London at the British Museum, which I’ve been helping to organise with photographers Diane Patrice and Harandane Dicko, and curator Sophie Mew.

Keep an eye on African Art in London for updates, or check out the festival website here.